An ambitious young drummer (Miles Teller) at a prestigious music academy clashes with a hard-driving instructor (J.K. Simmons) in this sizzling drama that is already one of the year’s most talked-about films. 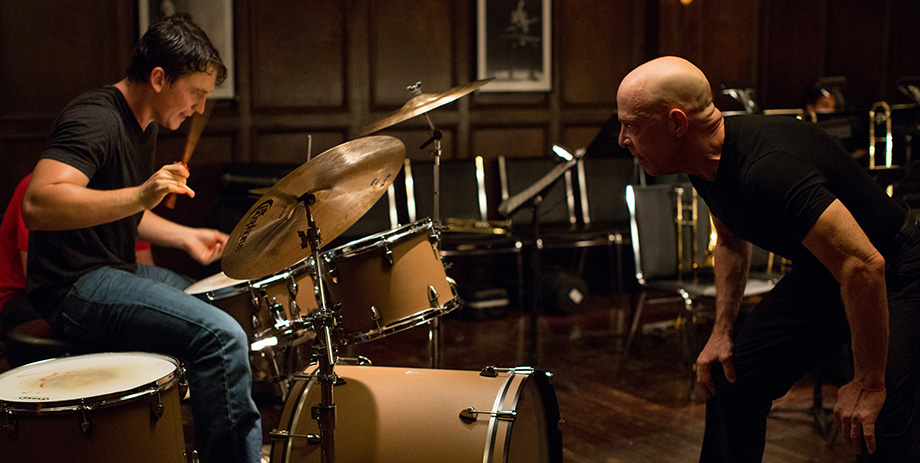 "There are no two words more harmful than 'good job.'" This sentiment — spoken by a music teacher to a young student — sows the seeds of a harsh tutelage in Whiplash, a cautionary tale about the pursuit of excellence.

In his second feature film, writer-director Damien Chazelle pits revered and feared jazz conservatory instructor Terence Fletcher (J.K. Simmons) against drumming prodigy Andrew Neyman (Miles Teller). Vying for a core position in Fletcher's elite ensemble, and aspiring to no less than greatness, Neyman will do anything to secure first chair. Before long, reason is abandoned and civility deserted, and the blistered and bleeding Neyman succumbs to Fletcher's abusive teaching techniques. But Neyman has a couple of surprises up his sleeve, and things will get progressively nastier — both on and off the stage — before their scorching musical showdown.

Teller and Simmons fairly leap off the screen with arresting physicality. Their performative rhythms mesh with Chazelle's stylish, syncopated directing to suffuse the film with an anxious energy that will keep audiences on the edge of their seats, while Tom Cross's staccato editing makes the film play like its own brilliant piece of music.

Winner of both the US Grand Jury and Audience Awards at this year's Sundance Film Festival, and executive-produced by Jason Reitman (whose own Men, Women & Children is premiering at this year's Festival and also features Simmons), Whiplash announces Chazelle as one of the most exciting talents to emerge from the US in recent years. At once fierce and precise, the film begs the question: how far would you go to achieve perfection?