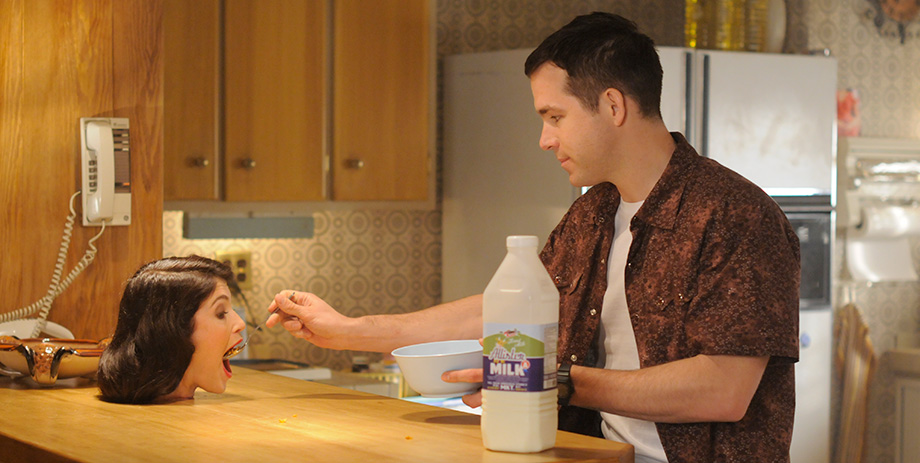 From the fecund imagination of Marjane Satrapi (Persepolis) comes this very twisted horror-comedy about an awkward young shipping clerk, his talking pets, and the things that can happen when you suddenly stop taking your medication.

At first glance, Jerry (Ryan Reynolds) isn't an unappealing guy. He's handsome, friendly, always upbeat, and he likes animals. But Jerry's got problems. His psychotherapist (Jacki Weaver) has him on a strict regimen of antipsychotics, and when Jerry stops taking his medicine, the voices come back: his dog assures him that he's a swell guy, while his cat constantly reminds him that he's deranged, idiotic, and unlovable. Determined to prove the cat wrong, Jerry asks his co-worker Fiona (Gemma Arterton, also appearing at the Festival in Gemma Bovery) out to dinner. It turns out Jerry's a bad date. Crazy bad.

Set in the picturesque fictional town of Milton, The Voices is an outrageous send-up of American optimism in keeping with the best of Tim Burton or John Waters. The film's violence is brutal but also heavily stylized — Jerry's in denial of the horrendous crimes he's committing, and much of what we see is tempered by his skewed perspective. Reynolds gives a brilliantly wacky performance, at once tormented and childishly cheerful. His descent into madness will have you appalled and amused, right up to the musical number that brings The Voices to its insane finish.