A long-married couple (Morgan Freeman and Diane Keaton) have an eventful weekend after they are forced to contemplate selling their beloved Brooklyn apartment. 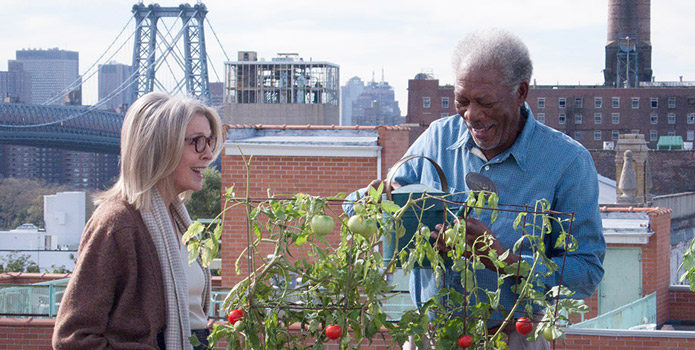 A wise comedy about life, love, and real estate, Ruth & Alex stars Academy Award winners Diane Keaton and Morgan Freeman as a couple whose attempts at relocation send them on an urban odyssey — and help them redefine the meaning of home.

When Ruth (Diane Keaton) and Alex (Morgan Freeman) first moved to Brooklyn, it was the 1970s — years before gentrification, and years before they would realize that they won't always be physically able to climb several flights of stairs just to get home. Still highly active, yet feeling the undeniable effects of age, the couple opts to put their apartment on the market. But the decision coincides with a flurry of problematic events. A trailer jackknifes on the Williamsburg Bridge and the driver inexplicably flees the scene, putting all of New York on an overblown terrorist alert. The couple's dog becomes ill and the vet bill comes to $10,000. An overwhelming sequence of encounters with realtors, agents, and snotty bargain hunters only adds to their troubles.

Based on Jill Ciment's novel Heroic Measures, Ruth & Alex is that rarest of films: a lively cinematic portrait of people in their so-called golden years. Director Richard Loncraine (Richard III), shifts us elegantly between the present-tense narrative and seventies flashbacks, which show Ruth and Alex falling in love during a period when doing so as a mixed-race couple prompted open hostility.

But the main reason to see Ruth & Alex is the sheer pleasure of watching its ingeniously cast leads. Keaton and Freeman are so brilliant with behavioural comedy, so at ease with the script's urbane wit, that their performances seem effortless. Ruth and Alex are a charming duo whose every word and gesture demonstrates a lifetime's worth of experience and love. You'll find it a joy to spend an hour and a half in their company.