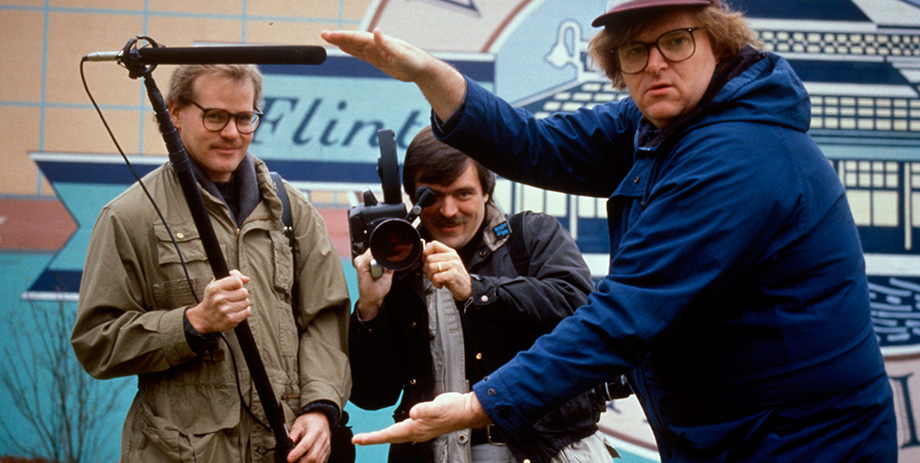 "When GM announced the closure of eleven plants and elimination of 30,000 jobs in Flint, Michigan, Michael Moore decided to make a film. He sold his house, held two giant lawn sales, and began to run a bingo game every Tuesday night to finance the film. Roger & Me is the result. It is a documentary not to be missed." — Roger & Me note, Festival 1989

Now celebrating its twenty-fifth anniversary with a new digital restoration, Roger & Me is a radical act of filmmaking with an incalculable influence.

In 1980s America, the "greed is good" ethos had eclipsed the counterculture. Politicians were enacting historic legislation to make life easier for corporations and harder for organized labour, and if you wanted to put a dissenting viewpoint on film, the production and distribution costs were enormous barriers. But Michael Moore, college dropout turned muckraking reporter, was not to be deterred. After his hometown, Flint, experienced multiple economic blows due to General Motors' radical plant closures, Moore headed up a novice film crew and embarked on a gonzo quest to discuss Flint's troubles with GM chairman Roger Smith. With an original flair for comedy and provocation, Moore turned his quixotic mission into a trenchant exploration of the vast divide between winners and losers in the American economy.

Roger & Me instantly entered Festival lore, squeaking into the selection at the last minute and becoming the first documentary to win the People's Choice Award. Acquired by Warner Brothers for distribution, the film was hailed by Roger Ebert as "a brave, brash breath of fresh air in American moviemaking." Moore's ensuing career, never short on controversy, has been an unparalleled force in expanding the reach of the documentary form. The passage of the past twenty-five years has made Roger & Me feel prescient and even more poignant.