In 1984 Britain, a ragtag band of activists from London’s queer community form an unlikely, anti-Thatcherite alliance with striking Welsh miners, in this hilarious and inspirational comedy-drama. 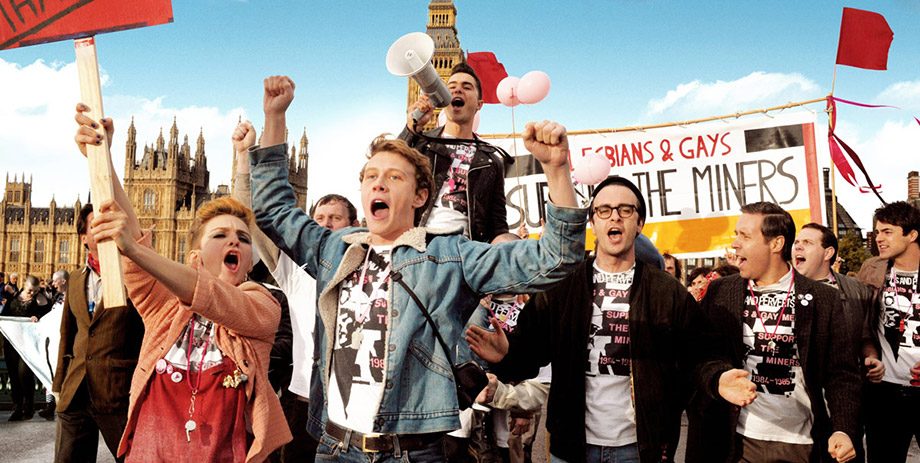 Margaret Thatcher's hard rule over 1980s Britain prompted much political action in response. Perhaps the most amazing response of all occurred when Welsh coal miners and London lesbians and gays found a common cause. Pride tells the story of that unlikely alliance; it was never obvious, but it sure looks like fun.

By 1984, new-wave music had taken over the clubs, Thatcher's government was battling mining unions, and London's queer communities were perfecting artful activism. Into that mix walks Mark (Ben Schnetzer). Out, proud, and always ready for a righteous battle, he can't accept that any one form of oppression should outrank another. Overcoming the reluctance of his ragtag band of friends — who would mostly rather party than protest — he brings them together to form Lesbians and Gays Support the Miners. But do the miners want this kind of support?

Pride is at its most outrageously funny when the LGSM activists crash into small-town South Wales in their brightly painted communal bus. Imelda Staunton is wonderful here as the hard-working Welsh woman whose support group holds the community together, while Paddy Considine plays a forward-thinking union organizer and the inimitable Bill Nighy takes a subtle role as the local pub historian. Their encounters with the misfits and rabble-rousers who make up the LGSM give Pride its comedy and its heart. Some in the mining village have to get over their homophobia. Some of the gay activists have to get over themselves. Brits excel at this kind of comedy of integration, and director Matthew Warchus's film is one of the best examples. With its recapturing of the glorious British eighties — not unlike the American sixties with its mix of protest, new music, and smashed social norms — Pride shows how exciting it was to be young then. And with its smart, nuanced understanding of the ongoing LGBTQ struggle, it affirms the power of movies to tell a transformational story.