In the aftermath of the 2010 earthquake, a middle-aged Port-au-Prince couple come face to face with the stark contradictions of Haitian society when they are forced to rent out their villa to a foreign aid worker and his enterprising local girlfriend. 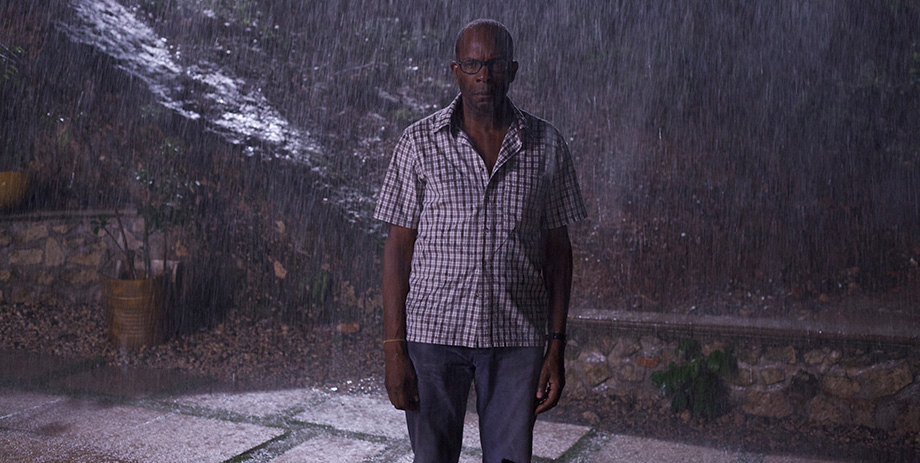 Director Raoul Peck's reaction to the devastating earthquake that rocked Haiti in January of 2010, claiming a quarter million lives and rendering 1.2 million homeless, was to embark on the two-year task of making the powerful documentary Fatal Assistance. While directing that film, he also teamed up with acclaimed Haitian writer Lyonel Trouillot to develop the script for Murder in Pacot, a huis clos set in the ruins of a bourgeois couple's home in Port-au- Prince's upscale Pacot neighbourhood.

Barely a couple of days after the earthquake destroys most of their villa, a man (Alex Descas) and his wife (Joy Olasunmibo Ogunmakin) are visited by a team of foreign surveyors and given an ultimatum: fix it entirely in a few weeks, or it will be razed to the ground. The newly penniless couple rent the habitable part of the villa to Alex (Thibault Vinçon) — a relief worker who benefits from the high remuneration granted to foreign humanitarian personnel in Haiti — in order to put his rent payments towards repairs. To their surprise, their new tenant also comes with a Haitian girlfriend, Andrémise (Lovely Kermonde Fifi), a sassy and enterprising young woman who has renamed herself Jennifer to attract foreign suitors in Port-au-Prince. As the ground rumbles with aftershocks, the once-privileged couple, now destitute and helpless, comes for the first time face-to-face with the stark contradictions of Haitian society.

With masterful pacing and precise performances, Peck's film explores the fundamental questions of citizenship, responsibility, and justice that have challenged Haitian society ever since it emerged from decades of dictatorship. Murder in Pacot evokes a "Haiti Year Zero" with compelling acuity; it is riveting, complex, and a veritable tour de force.