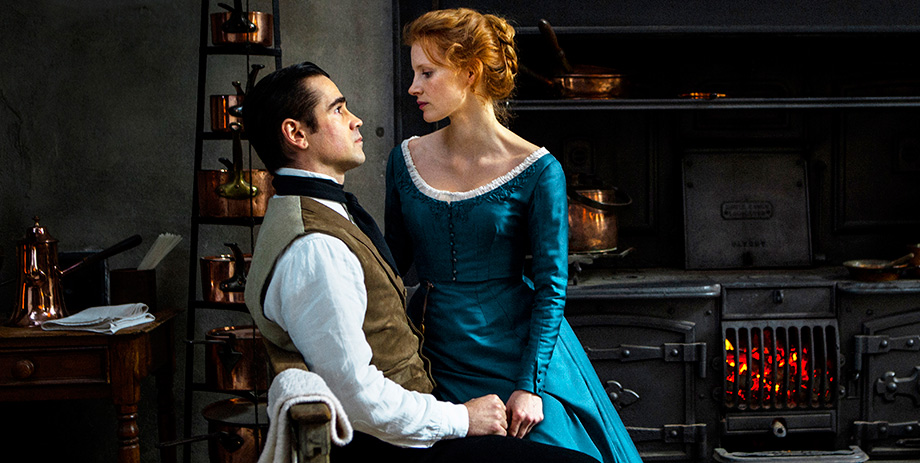 The ten films in which Liv Ullmann starred for Ingmar Bergman — including such classics as Persona, Cries and Whispers, and Scenes from a Marriage — represent one of the greatest director-actor collaborations in cinema history. It was no surprise, then, that when Ullmann herself moved into the director's chair, she demonstrated an unerring ability to summon the best from her casts. That skill is once again on display in her adaptation of Miss Julie, a lacerating study of class, power, and desire that unfolds one Midsummer's Eve in the late 1800s.

Moving the action of August Strindberg's canonical play from Sweden to County Fermanagh in the north of Ireland, Ullmann's film opens as the eponymous Julie (Jessica Chastain), daughter of an Anglo-Irish aristocrat, sets out to seduce one of her father's senior servants, the worldly valet John (Colin Farrell). The charged flirtation between the two doubles as a kind of psychological gamesmanship, which deepens and darkens as the night rolls on — much of it witnessed by the house cook Kathleen (Samantha Morton), who, despite being John's's ostensible betrothed, remains quietly resigned throughout.

Seamlessly combining the spatial dictates of the stage with the geographical freedom of film, Ullmann makes brilliant use of the vast country manor in which the film is set, dividing its rooms into compartments of anxious activity, with the kitchen serving as the nucleus of simmering tensions waiting to boil over. As would be expected, Miss Julie's greatest strength derives from its performances. As Julie, Chastain possesses a beguiling blend of privileged petulance and vulnerability, while Farrell is deliciously duplicitous as John, slipping between bootlicking submission and sudden displays of dominance. Yet the film's secret weapon is Morton, frequently acting opposite an ailing pug yet exuding an eerie canniness about all that transpires as this upstairs-downstairs contest careens toward its chilling finish.