A Midwestern farmer (Arnold Schwarzenegger) stays by the side of his beloved teenage daughter (Abigail Breslin) even as she slowly turns into a cannibalistic zombie, in this audacious, genre-bending debut feature from director Henry Hobson. 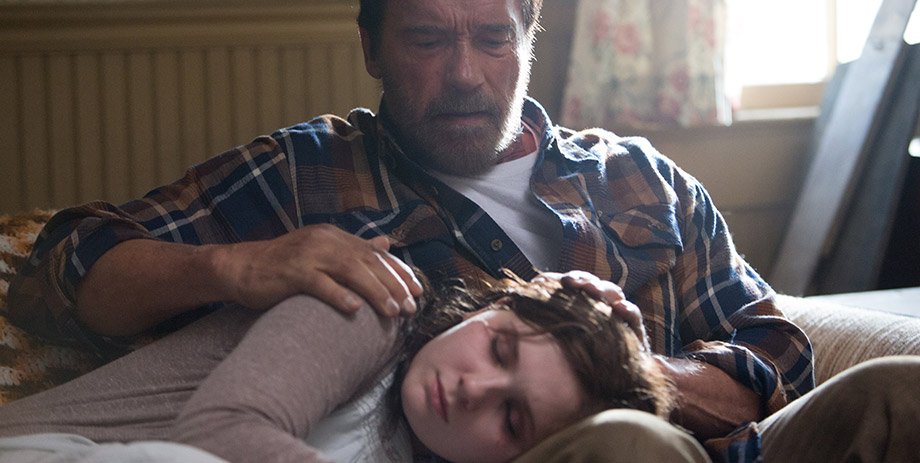 Schwarzenegger. Art house. Coming of age. Monsters. Filmmaker Henry Hobson unites this unlikely cinematic foursome in one of the year's most audacious discoveries, Maggie. Working from John Scott 3's script, whose genre-bending ingenuity garnered it a place on Hollywood's much-talked-about Black List, Hobson creates a world that is at once familiar and foreign.

Wade (Arnold Schwarzenegger) is a farmer and father of three, living with his family in America's rural Midwest. When his eldest daughter Maggie (Abigail Breslin) becomes infected with a mysterious disease that slowly turns its victims into zombie-like creatures, Wade is left with a decision that no father should have to face — while Maggie, still a typical teenager at heart, is acutely aware that life as she knows it is soon to end. As she changes slowly but surely, her loving father remains by her side. But with her sense of smell heightening and her cravings for meat intensifying, how long can they delay the inevitable?

Schwarzenegger is superb in an unexpectedly naturalistic performance, and his talents are matched by Breslin's affecting subtlety. First-time director Hobson shows himself to be a master of tone as he brings the calibrated restraint and rich texture of Scott's script to the screen, capitalizing on the tension between the ongoing necessity of daily work and Maggie's looming fate. Featuring striking cinematography by Lukas Ettlin, whose playful treatment with focal depths conveys Maggie's changing approach to her surroundings, Hobson's assured debut pits his characters against their own internal apocalypses.