A clueless police inspector stumbles his way through a provincial murder investigation, in this shocking — and shockingly funny — change of pace from premier French auteur Bruno Dumont (L’humanité, Hadewijch). 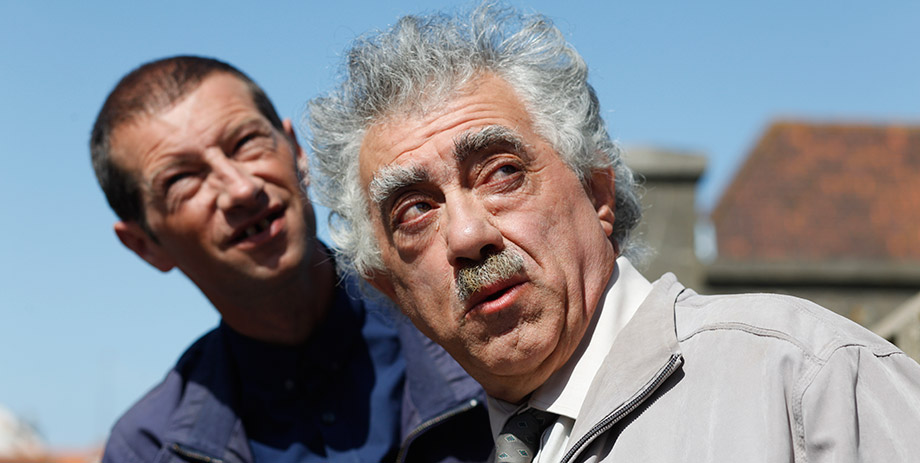 Originally conceived and broadcast as a four-part miniseries, Bruno Dumont's P'tit Quinquin works seamlessly when screened in its cinematic version.

Dumont has again chosen to shoot his new film against the countryside of his birthplace, the Boulonnais region around Calais; apart from that, the film marks a notable change in tone for this immensely creative filmmaker. (Well, it does share one other thing in common with his earlier films: like L'Humanite, the film centres on a police detective investigating a murder.)

P'tit Quinquin is — believe it or not for those who have been following Dumont's career — a comedy. Little prepares you for the adventure, rollicking and slapstick, in this idiosyncratic screwball of a film. Chuckles abound — at times you can't quite believe what you are seeing — but, not surprisingly in the hands of a director who has always managed to keep a firm, controlling hand on his material, the film never spirals into silliness. Wit and intelligence prevail.

Police captain Van der Weyden (Bernard Pruvost), a man with unending facial and body tics, is a slightly more subdued version of Peter Sellers's Inspector Clouseau. Add his sidekick, the lead-footed Carpentier (Philippe Jore), and the effect becomes that of a modern-day Laurel and Hardy. The discovery, in an abandoned WWII German bunker, of a dead cow apparently stuffed with human remains sends the bumbling cop on an investigation through the area's back roads. On their heels, raising havoc of all kinds, is good-for-nothing kid Quinquin (Alane Delhaye), his trumpet-playing girlfriend, and a bevy of impish buddies.

P'tit Quinquin's tone may well be comic, but in the course of its running time Dumont touches on numerous issues that complicate his rural, Picard-speaking corner of France: immigration, racism, marital discord, illicit sex, and, of course, violence. Scratch beneath the surface and see what you find!