A record of the epistolary encounter between French artist and filmmaker Eric Baudelaire and Maxim Gvinjia, former Foreign Minister of the breakaway Caucasian state of Abkhazia, Letters to Max is both a chronicle of a developing friendship and an ingenious, unusual essay film about the inherently speculative nature of nationhood. 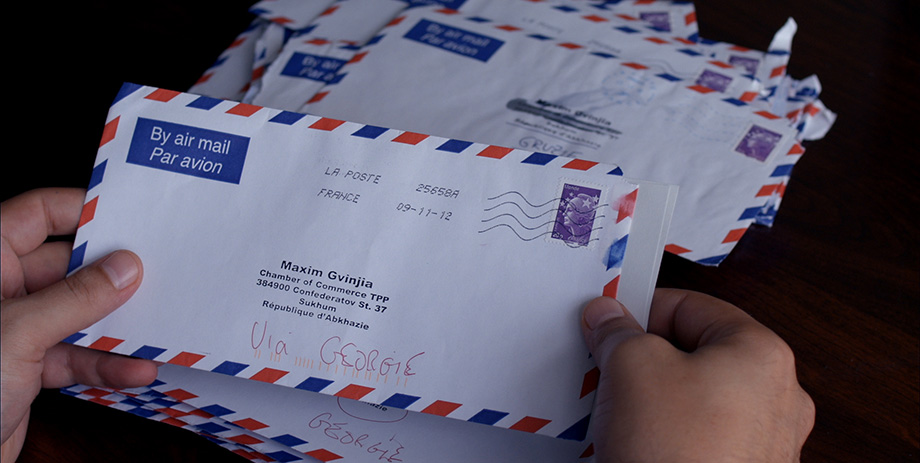 Even in our so-called "post-national" age, the idea of nationhood continues to be both celebrated and feared as territories are contested, global power dynamics shift, and history, more often than not, repeats itself. In Letters to Max, acclaimed French artist and filmmaker Eric Baudelaire — known for his research-based photographic, video, and installation practice, including his collaborations with former filmmaker-cum–Red Army radical Masao Adachi — directs his attention to the Caucasian state of Abkhazia, whose status as a nation is manifestly paradoxical. A country with physical borders, a government, and its own flag, Abkhazia was for nearly two decades not recognized as a nation by any other nation-state, following its secession from Georgia during a civil war in 1992-1993.

In the summer of 2012, Baudelaire posted a brief note to Abkhazia from Paris, thinking it would never arrive — the equivalent of a message in a bottle tossed out to sea. When his letter actually received a reply (a full ten weeks later and by phone, as Abkhazia's local post office does not administer international mail), it sparked a correspondence between Baudelaire and Maxim Gvinjia, Abkhazia's former foreign minister. Structured around Baudelaire's missives to Max — with Gvinjia's seemingly candid responses read in voice-over, and featuring remarkable footage of the stateless state captured by the filmmaker — Letters to Max is simultaneously a record of this unlikely epistolary encounter, a chronicle of a friendship, and an ingenious and unusual essay film about the inherently speculative nature of nationhood. Both witness to and artifact of Abkhazia's quest to have its felt reality sanctioned by the equally invented reality of the international state system, Baudelaire's Letters to Max explores concepts of hybrid authorship and fractured perspectives as it pens a prescient document for a region that, as recent events have attested, is still very much a work in progress.