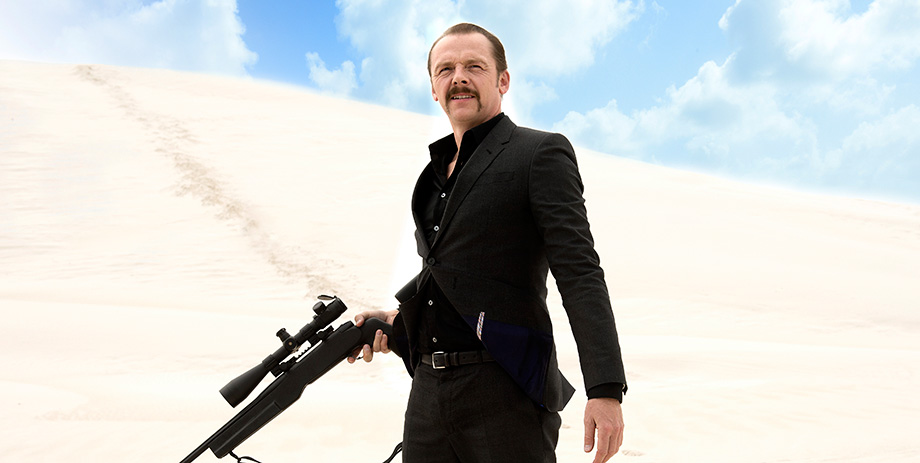 Gruesome and hilarious, Kill Me Three Times is a blackly comic neo-noir that unfolds in an Australian surfing town under a blinding sun — all the better to illuminate its cleverly designed network of malfeasance.

A dental surgeon (Sullivan Stapleton) with gambling debts and a conniving spouse (Teresa Palmer), a hunky gas jockey (Luke Hemsworth) looking to skip town with his secret lover, a corrupt cop (Bryan Brown), a motel proprietor (Callan Mulvey) who's become excessively proprietary over his wife: each of these characters has a scheme to realize, and each scheme requires the elimination of the same woman (Alice Braga) — though she seems to have a scheme of her own. Involved in all these sordid transactions is one Mister Wolfe (Simon Pegg), a seasoned professional in the practice of snooping and, for the right price, murder.

Director Kriv Stenders and screenwriter James McFarland have crafted a suspenseful, knotted plot rigged with hairpin turns and bleak surprises, while cinematographer Geoffrey Simpson's sun-punched images keep us grounded in a world of sweaty tension as we careen from one perspective to the next. The ensemble cast is terrific, and Pegg — inhabiting a role unlike any other he's played to date — is the standout. With his handlebar moustache and tailored suits, he could pass as a member of Nick Cave & The Bad Seeds, and his sly, observant yet cold-hearted outsider could be one of the doomed protagonists in Cave's canon of murder ballads.

With its looping narrative reminiscent of Pulp Fiction, and its wicked web of blackmail and deceit recalling the novels of Jim Thompson and Elmore Leonard, Kill Me Three Times wittily explores the consequences of following our baser instincts. You'll die laughing.