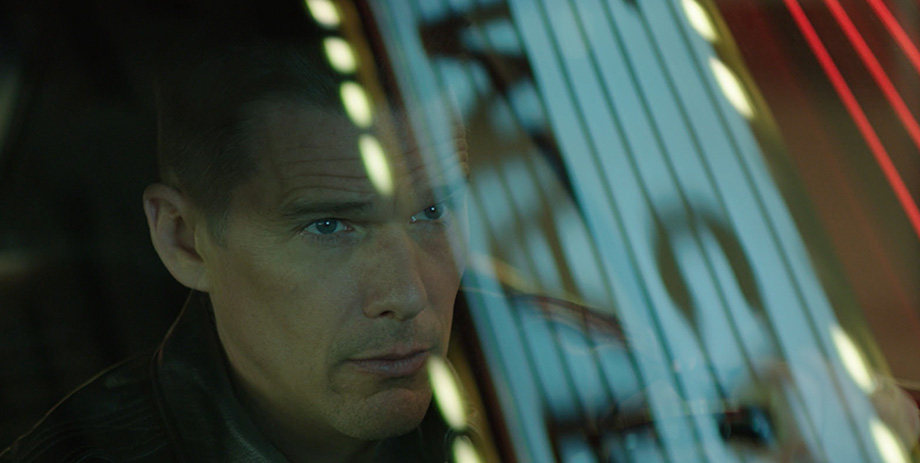 In an air-conditioned shipping container somewhere in the Nevada desert, a war is being waged. Behind a door that reads "YOU ARE NOW LEAVING THE USA," five flight-suited US Air Force officers operate drones that hover above "zones of interest" in the Middle East. At the press of a button, tiny targets viewed on computer screens vanish in plumes of smoke, as in a videogame. "I blew up six Taliban in Pakistan today," Major Thomas Egan (Ethan Hawke) tells a convenience store clerk. "Now I'm going home to barbecue."

In such films as Gattaca, S1m0ne, and Lord of War, writer-director Andrew Niccol thoughtfully considered the human costs of advanced technology. With his new film, Good Kill, he offers a chilling inside look at drone warfare and its collateral damage — not just abroad, but on the home front, where soldiers succumb to PTSD without even setting foot on a battlefield.

Egan used to live to fly. Now, he spends eight hours each day fighting the War on Terror by remote control and the remaining time at his suburban home, where he feuds with his wife (Mad Men's January Jones), and numbs his boredom, rage, and guilt with alcohol. When Egan and his crew are told to start taking orders directly from the CIA — which selects its targets based not on personal profiles but patterns of activity — the notion of a "good" kill becomes even more maddeningly abstract, and Egan's ability to comply with his superiors' directives reaches its breaking point.

Bringing intelligence and compassion to a story about ordinary people caught up in global conflicts beyond their comprehension, Good Kill is a bold and troubling film, raising urgent moral questions that all of us need to reckon with.