An impulsive decision in a moment of crisis drives a wedge between a husband and wife, in this gripping moral drama from provocative director Ruben Östlund (Play) that became a word-of-mouth sensation at this year’s Cannes. 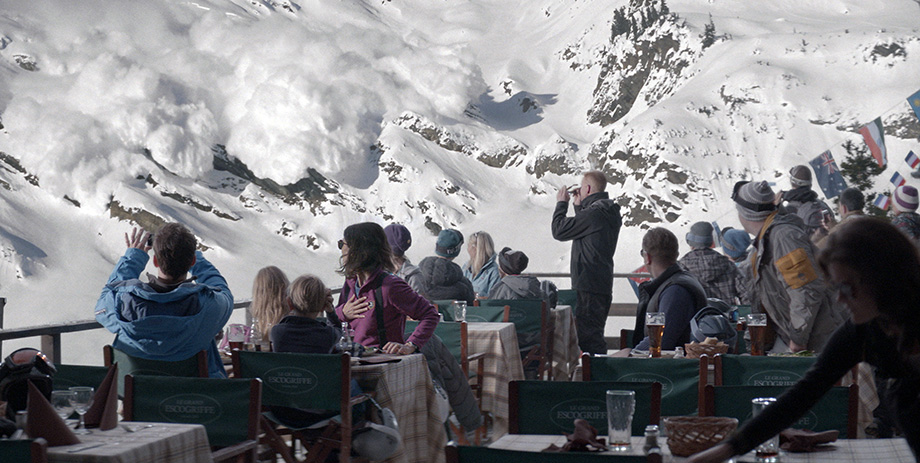 One of the most daring and audacious filmmakers to emerge in the last decade, Ruben Östlund hit a new peak with Force Majeure, a critical hit at this year's Cannes. As in his previous films Involuntary and Play, with his latest Östlund turns a keenly analytic eye on those principles we supposedly live by, and explores what happens when the codes of conduct enforcing those principles are abruptly stripped away.

On a family skiing vacation in the French Alps, Tomas (Johannes Bah Kuhnke) and Ebba (Lisa Loven Kongsli) are enjoying lunch with their two children when their meal is suddenly interrupted by thunderous booms emanating from the mountain above them. The complacent Tomas initially dismisses the possibility of danger — but when it appears that there may be an avalanche, he grabs his cellphone and bolts, leaving his wife and children to fend for themselves. The remainder of the film monitors the fallout from this fateful incident, as husband and wife hotly debate what actually occurred, and what Tomas's proper response should have been — a battle that eventually threatens not just Tomas and Ebba's relationship, but those of the people around them.

Both psychologically and sociologically acute, Force Majeure boasts a number of bravura moments that range from terrifying to comic — most notably, and daringly, an extended crying jag/confession by one of the principals that is as indelible as the tear-drenched finale of Tsai Ming-Liang's Vive L'Amour. While on the one hand this climactic confession is self-serving, convoluted and shambolic, it also seems bizarrely honest. Probing that paradox with intelligence and incisiveness, it's little wonder that, with Force Majeure, Östlund has earned comparisons to such masterful cinematic social critics as Michael Haneke and Östlund's countryman and mentor Roy Andersson.