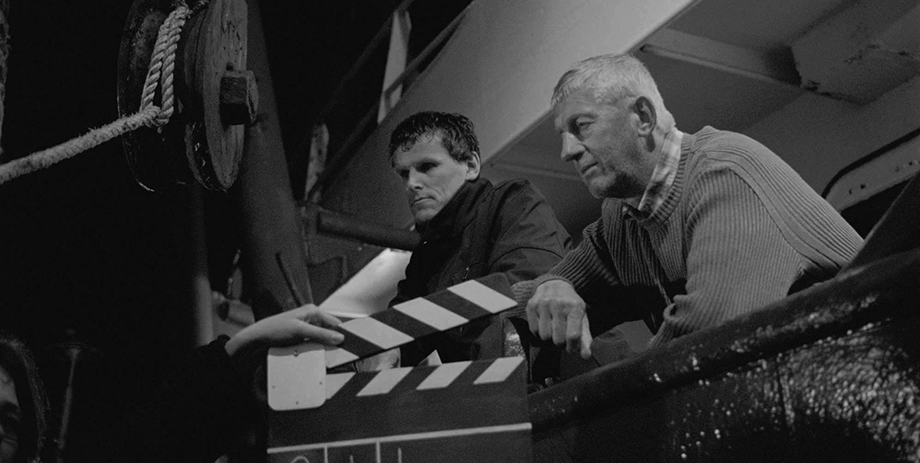 Episode of the Sea

Shot on 35mm in lustrous monochromatic grays, the latest film project from Dutch duo Lonnie van Brummelen and Siebren de Hann continues the artists' interest in shifting economies, borders, and material conditions as it documents the tenacious traditionalism of the remote Dutch fishing community of Urk.

Formerly an island unto itself, until the inland sea in which it was located was drained to create new farmland, Urk has remained a fishing town despite government pressure to adopt agriculture, and has retained a distinctively archaic aura: its residents speak a distinctive dialect, religion plays a pivotal role in the community, and certain outmoded customs remain anachronistically lodged in the present. Over the course of two years of research, observation, and participation, van Brummelen and de Hann devised a dozen scenes that were then performed by members of the fishing community themselves. Drawing parallels between fishing and filming, the artists exceed ethnography as they situate the community's daily labouring life within a globalized context of fluctuating regulations and excessive international competition.

Though its stunning cinematography and mythic tone echo such formidable fishing films as Visconti's La terra trema, Rouch's Bataille sur le grand fleuve, and Flaherty's Man of Aran, Episode of the Sea is also marked by droll humour and Kaurismäkian charisma as the participants infuse the film with their own idiosyncratic personalities and convictions. Most pertinently, perhaps, the film recalls Pierre Perrault's and Michel Brault's masterpiece Pour la suite du monde as its subjects perform their ways of life, consciously and actively representing their preserved past in the face of an uncertain future.