Recently cuckolded and reeling from a messy divorce, a hapless former singer hits the road — and the bar — with his all-too-helpful best bud, in this raunchy romantic comedy from director Ning Hao (No Man's Land). 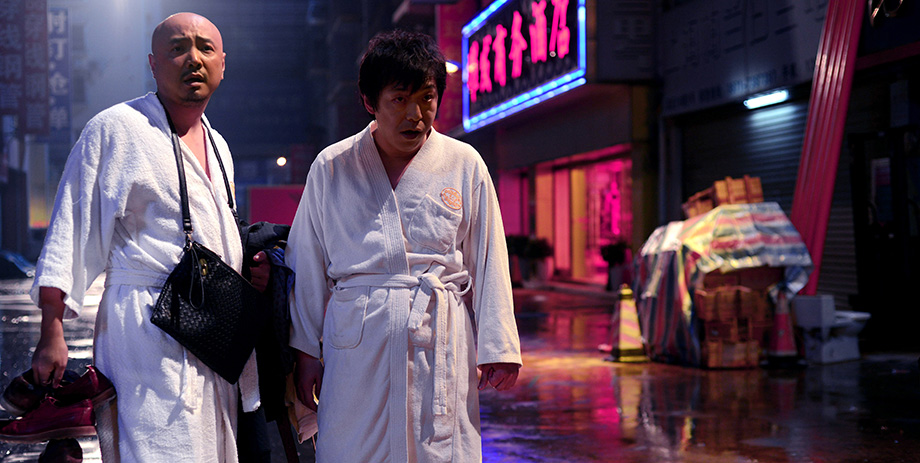 Ning Hao broke Chinese box office records in 2006 with the black comedy Crazy Stone, a low-budget film with a cast of unknowns that featured brilliant dialogue, daring content and groundbreaking style. In his latest film, Breakup Buddies, Ning brings his one-of-a-kind, uproarious talent to a genre very dear to him: the road movie. A light-hearted spin on a serious theme — the search for real values in life — the film presents its protagonists' journey as a rite of passage and a cure for a wounded soul, but also as a vacation and an often-ridiculous adventure.

Geng Hao (Huang Bo) is heartbroken. His wife has left him and filed for divorce. Inconsolable, he drinks himself into oblivion, and winds up in a hospital where he is rescued by his best friend Hao Yi (Xu Zheng). Hao Yi, wanting to help pull Geng Hao out of his depression, comes up with a brilliant idea: the two of them will go on a trip "hunting" for girls. And they're off. From Beijing to Shangri-La to Dali in Southwest China, the two friends (and a dog) encounter a gallery of finely observed characters in a series of outlandish, absurd situations.

Huang and Xu, two of China's finest actors — and audience darlings behind the success of films like Lost in Thailand — give their characters multi-faceted comedic dimension. Ning, with his trademark acumen, incisiveness, and explosive energy, has once again created a hilarious and utterly original film: a dazzling look at the antiheroes of China.