Director Pascale Ferran’s (Lady Chatterley) whimsical fable about the magically crossing paths of a disgruntled American businessman and a daydreaming French hotel maid was a smash hit at this year’s Cannes. 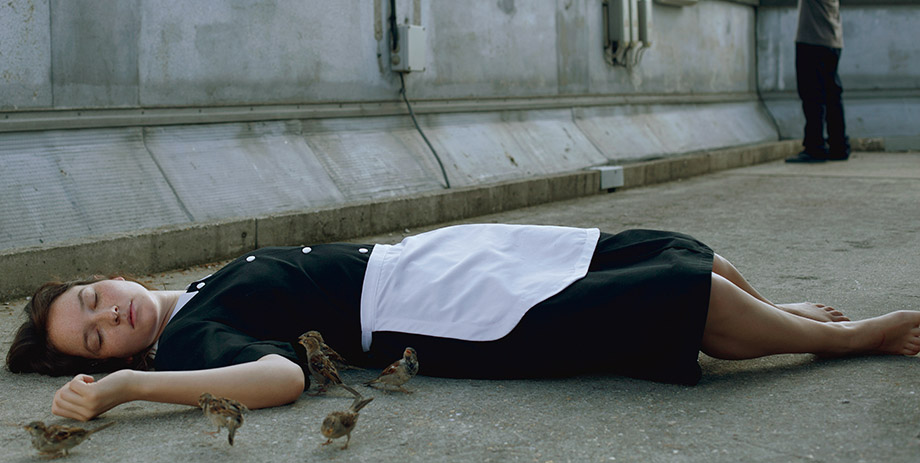 Pascale Ferran's delightful and utterly surprising Bird People is a film about two people and is appropriately divided into two halves. The first introduces us to a well-travelled American businessman who is in Paris to touch base with his tech company's business partners before flying off to another locale for more meetings. The second belongs largely to a young French chambermaid who happens to work in the hotel where Gary parks himself for his intended overnighter.

The film loiters around both their lives in a simmering build toward what follows. Gary (Josh Charles) finds himself in a crisis. He decides out of the blue that he needs to shake up his life, so he quits his job, much to the consternation of his company and his wife, who are left wondering what is going on. Amid sharp phone and Skype calls back to the States, and notes of alienation and confusion, the pace remains even. Ferran then shifts his focus to the observant Audrey (Anaïs Demoustier), who ambles around the hotel doing her mundane work while daydreaming about her future. Suddenly, in a stroke of genius, Bird People morphs into cinematic magic as Audrey's story moves into a very different territory and Ferran kicks up the visual content dramatically.

It would be spoiling the fun to give away any more. Suffice it to say, the result is enchanting and disarming. After winning new fans with her D.H. Lawrence adaptation Lady Chatterley (06), Ferran proves her talent for whimsy and deeply imaginative explorations of states of mind. Here, again, she shows that she and her heroines can soar.