Out of a job after a disastrous product launch, a big-city yuppie retreats to his suburban childhood home, in this heart-warming and hilarious film about crashing hard, coming home and waking up. 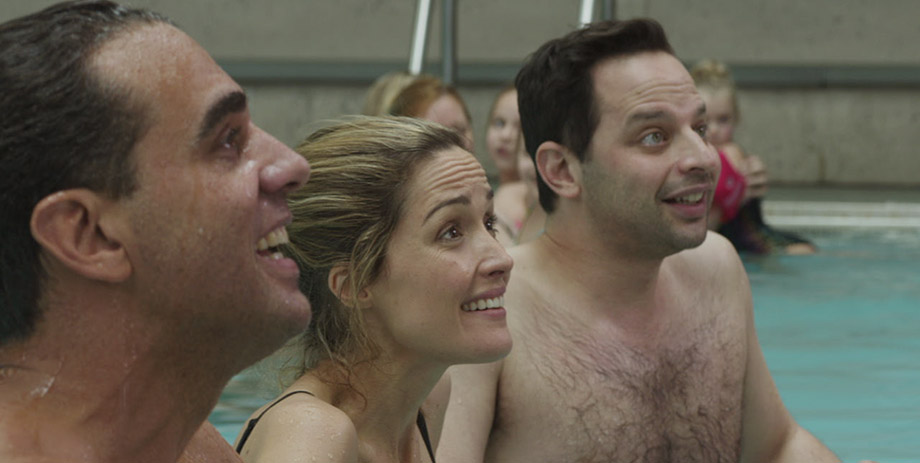 Academy Award-nominated producer Ross Katz (In the Bedroom, Lost in Translation) makes his feature directorial debut with this heartwarming and hilarious film (whose executive producers include indie kings Jay and Mark Duplass) about crashing hard, coming home and waking up.

Adult Beginners begins with one yuppie's disaster. On the eve of the product launch designed to shoot his career into the stratosphere, Jake (Nick Kroll) discovers that, because of a single misstep, his life has plummeted into the dirt. Having lost his girlfriend, his credibility, and over $2.5 million in investor money, Jake retreats to the one place where he's always welcome: his childhood home, which is now occupied by his pregnant sister Justine (Rose Byrne, also appearing at the Festival in This is Where I Leave You), her husband Danny (Bobby Cannavale), and their three-year-old son, Teddy. Justine and Danny agree that Jake can stay as long as he wants — so long as he agrees to look after Teddy on the weekdays. Used to a high-rollin' big-city lifestyle, and knowing zilch about childcare, Jake can't wait for his spell in suburban purgatory to end. But with a little time and a lot of humility, he may just develop a new idea about where he really belongs.

Jeff Cox and Elizabeth Flahive's punchy, humour-filled script is animated brilliantly by the cast. With his dry wit and mischievous grin, Kroll is pure charisma, while Byrne gives a vivid portrayal of a working mother desperate for a break and Cannavale radiates a resonant blend of paternal affection and pent-up anxiety.

Adult Beginners speaks to that voice in each of us that wonders if we're allowed to fail and still move forward. The film's message is clear: just when you think it's all over, a fresh start awaits. Because even as adults, we can all begin again.