In the divided city of Belfast at the height of The Troubles, a rookie British soldier (Jack O'Connell, Starred Up) finds himself separated from his unit and lost in IRA-controlled territory, in this gripping fusion of charged political drama and action-thriller. 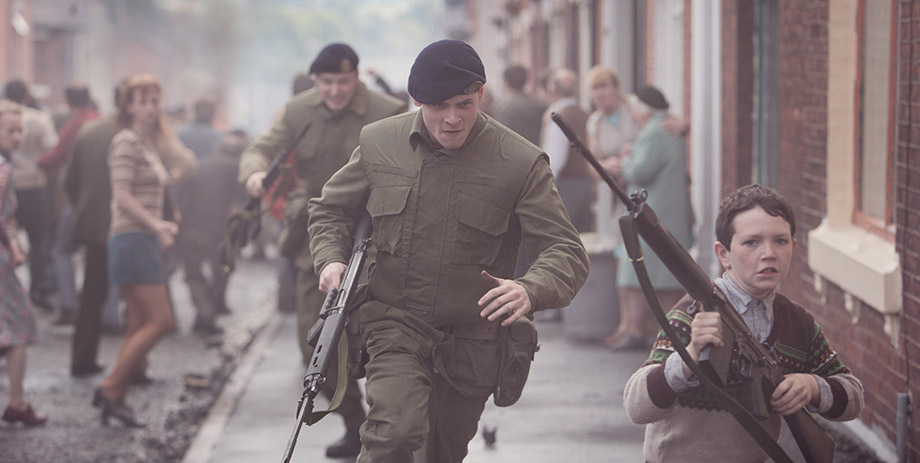 Thrilling, tense, and directed with prodigious confidence, '71 announced itself as one of the best films at this year's Berlin Film Festival. Its director, Yann Demange, wasn't well known outside the UK. That's about to change.

In 1971, Gary (Jack O'Connell) and Thommo (Jack Lowden) are teenage British Army recruits, still learning military discipline as their unit trains for duty in Germany. Plans change and this group of untested men, barely out of school, are thrust instead into the maw of Northern Ireland.

Trouble starts as soon as their boots hit the ground. Belfast is divided by religion and politics, with a line of unpredictable violence separating the Protestant Loyalist areas and the mostly Catholic Nationalist districts whose inhabitants oppose British rule. Gary and Thommo's squad is immediately ordered to patrol a Catholic area. Things don't go well.

It's when Gary and Thommo are separated from their squad that '71 becomes a truly remarkable drama. Racing through the warren of brick alleys and row houses transformed into hideouts, Gary finds himself alone in an especially complicated war zone. Without his unit to protect him, can he shed his uniform and hide in plain sight to avoid being shot dead? A local Loyalist boy offers help, but can he be trusted?

O'Connell impressed in last year's Festival discovery Starred Up, and went on to take the lead role in Angelina Jolie's forthcoming Unbroken. Here he shows the makings of a star, conveying both the emotion and the animal instinct of a man at the centre of a manhunt. As his British Army squad tries to rescue him, danger looms on all sides from the Irish Republican Army, the more volatile Provisional IRA, and even the Loyalist fighters.

With a mix of action-movie suspense and complex political drama worthy of Kathryn Bigelow, Demange directs '71 with a muscular, urgent style. This is a director to watch.